Health & Safety: can’t see the wood for the trees

Should you go beyond health & safety compliance?

Should you go beyond health & safety compliance?

Latest figures from the HSE website indicate they successfully –

The figure above are just the tip of the iceberg when you consider how many companies avoid prosecution by the skin of their teeth.

Even with this rate of enforcement it appears health & safety is the one area companies believe they can get away with the barely keeping their head above water. Doing the bare minimum to stay compliant but finding their management systems lacking when something goes wrong. So why is this?

Money, why spend it something that appears to have no tangible benefit?

Health & safety is much like one of Herzberg’s hygiene factors. Something you do not notice until it is gone. Turning on the light is second nature to many and they never consider the electric not being available; however if the electrics fail you soon notice and mayhem ensues whilst you try and think of all the other things that are now not going to work. This is very much how health & safety should be, unnoticeable until it is not there.

However, some controlling minds within companies do not fully understand the concept. Blithely accepting the system in place complies and will protect them. Why do they need to be more than compliant?

Systems designed and maintained to go beyond compliance will inevitably cost more. But the resultant savings in lost time reduction, fines, court fees, insurance hikes etc. can be significant. It may be difficult sometimes to justify why the money is being spent, but health & safety should never be ignored to maintain short term profits.

Bravado. It never going to happen to us?

This is something every health & safety professional would have heard and is one of the most difficult mind sets to overcome. After all we have always done it this way and nothing has happened.

All the companies that make up the HSE figures would have someone who thinks It has never happened before so why should that change? Usually based on the individual perception of someone who has never themselves been at risk due to some else’s bounded rationality.

It is easy to be brave and ignore the risks when you are out of the firing line, but facing charges of corporate homicide or gross negligence etc. can be a harrowing experience, one which many may not be able to cope with.

Just because it has not happened does not mean it will not. Having systems in place which can cope with every foreseeable occurrence, no matter how remote, significantly reduces the chances of a traumatic court appearance.

Ignorance. But nobody told me this could happen.

The last bastion of those that do not want to deal with health & safety, but this bastion is about as substantial as a dream.  Ignorance is no defence in the eyes of the law. Nor is it comforting to those who have been harmed due to compliant but ultimately inadequate health & safety.

Compensation claims are being made every day based on industrial diseases that were known about but poorly controlled, such as industrial deafness. It was well known that loud noise could damage hearing and most company’s provided hearing protection. Compliant?

But the ignorance comes from the fact that using the hearing protection was not enforced. Now that non-enforcement is resulting in an ever increasing number of people making compensation claims Enforcement of use would have gone beyond compliance but would now be saving these industries millions.

Having health & safety system in place that goes beyond compliance may have a minimal cost implication, but that cost is insignificant compared to the expense involved in being prosecuted or dealing with compensation claims decades later.

Health & safety like any other facet of the business should been seen as an investment opportunity in the future of the company, not a drain on resources. An investment that will eventually pay off in the long run.

Worst case is you can view going beyond health & safety compliance like buying a better insurance policy which will pay dividends when you need it most.

If you would like to know more about what we can do for you then check out our Safety Consultancy pages. 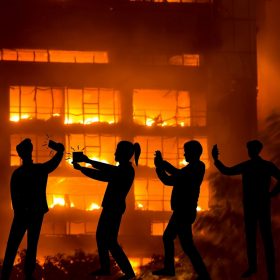 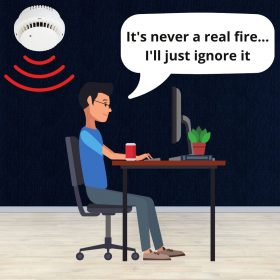 Why do we Ignore Fire Alarms? 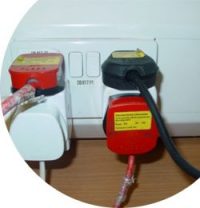 Electrical Standard changes 2020: How will it affect landlords?